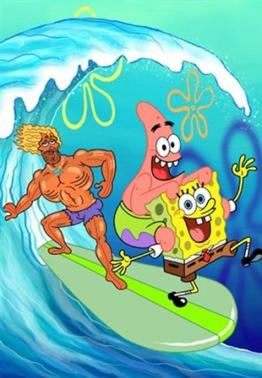 Nickelodeon, the number-one entertainment brand for kids, has paired the legendary actor Johnny Depp with the legendary SpongeBob in the first of several special on-air events this year in celebration of SpongeBob’s 10th anniversary.

SpongeBob SquarePants’ “SpongeBob vs. the Big One,” an all-new half-hour television special, will premiere Friday, April 17, from 8:00 to 8:30 p.m. (ET/PT). The special follows a stranded SpongeBob and his friends as they search for Jack Kahuna Laguna (voiced by Depp) to teach them the gnarly surf moves to hit the elusive wave, The Big One, in order to return to Bikini Bottom. The special also will air on Nicktoons Network, where it will encore Sunday, April 19, at 10 p.m. ET.

“We’re excited to have Johnny Depp guest star on the SpongeBob TV special that kicks off the series’ 10th anniversary celebration,” said Brown Johnson, President, Animation, Nickelodeon and MTVN Kids and Family Group. “This is a big year for our porous pal, and some of the biggest celebrities are helping us honor him in a special way throughout the year.”

While trying to sell Krabby Patties to hungry surfers in the waters of Goo Lagoon, SpongeBob (Tom Kenny), Patrick (Bill Fagerbakke), Squidward (Rodger Bumpass) and Mr. Krabs (Clancy Brown) are swept away by a giant wave. Mr. Krabs is carried to the haunted waters of Dutchman’s Triangle, and the other three find themselves stranded on a remote tropical island. In order to escape, they must find surf guru Jack Kahuna Laguna. JKL, as he is known, informs them that the only way back to Bikini Bottom is to surf the legendary wave called The Big One, which will arrive in just a matter of days. SpongeBob and the gang must absorb JKL’s lessons in order to shred the surf to avoid wiping out on the ride of their lives.

SpongeBob.com, the new vertical fan site, is the ultimate online destination for fans of all ages around the world to soak up all things SpongeBob. In addition to streaming an Instant Replay of SpongeBob vs. The Big One post premiere, the site will launch SpongeBob vs. The Big One Game of the Week and Gnarly Rip Curl, a new mini-game also based on the special, on Monday, April 13. Additionally, users will be able to unlock three “surfing shorts” immediately following the premiere by getting a code on-air and entering it on the site.

The site, which launched Jan. 9, 2009, features an age-appropriate community, complete with personalized profiles, chat features and playlists; the ability to search for favorite SpongeBob moments or comment on the funniest videos; or a new mini-game every week. More than 300 searchable SpongeBob video clips from every episode of the series will be available on the site at launch, as well as a selection of full-length episodes from each season and brand-new episodes immediately following their on-air premieres. Fans can also participate in the backstage area featuring crew blogs and interviews; play the more than 100 SpongeBob-themed games; or subscribe to the “Daily Affirmation”, providing SpongeBob’s thought of the day.

Check out my review of “Spongebob vs. The Big One” DVD! Click Here!