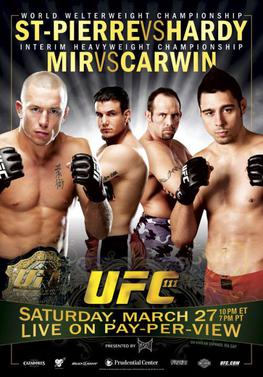 UFC 111: St-Pierre vs. Hardy, one of the most anticipated UFC events ever, is officially sold out. Now, for everyone who wants to see Georges St-Pierre, Dan Hardy, Frank Mir & Shane Carwin in person, and watch this epic Ultimate Fighting Championship event in New York, the UFC is taking over Radio City Music Hall to celebrate the UFC 111 mega-fight and deliver unprecedented access to the fighters getting ready to battle for world titles.

Experience the action on Saturday, March 27th when Radio City Music Hall hosts the UFC 111: St-Pierre vs. Hardy Viewing Party! The live PPV event will be broadcast in High Definition on a 70′ x 35′ screen — the largest ever for a UFC broadcast!

Be sure to arrive early for an exclusive Q & A Session with UFC Fighters Chuck “The Iceman” Liddell, Matt “The Terror” Serra and Stephan Bonnar!! Doors will open at 7:15pm ET; Q&A Session with UFC fighters and host will begin at 8:00pm ET. UFC 111 Screening begins at 9:00pm ET, including the Spike TV preliminary fights and the entire live UFC 111 Pay-Per-View card.

The viewing party is not all the UFC have planned, they have several planned events in New York and New Jersey throughout the week. Click here to view the press release detailing many of the events.