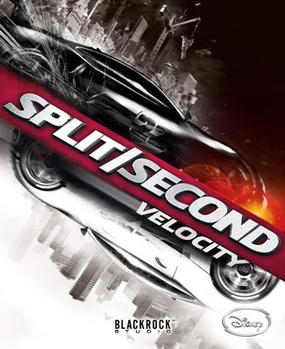 Fast and fun arcade racer leaves others in the dust!

With so many arcade racing games on the market, it is hard to find out which one will fully satisfy your inner speed demon. Thanks to Disney Interactive and Black Rock Studio’s Split/Second, you’ll get a mash up of all the great racers in one petal pushing package.

In the game, you’re a racer in a fictional reality television show called Split/Second. You play out the show’s season which is divided up into twelve episodes. Each circuit is an episode of the television show and each episode is filled with multiple races. On this show the players earns points based on their finishing positions in each race. After earning enough points for each episode, you can unlock the Elite race for the episode. In addition, you can earn new vehicles and unlock a special race for causing a given number of cars to crash during races.

This all makes for a decent single-player career mode. Unlocking new cars gives you that needed boost to zoom past your opponents. I do prefer the option of choosing the car you want to unlock next like in many other racing games, but I guess this title is just keeping up it’s streak of the element of surprise.

Differing even further from other racers, there are no real cars in the game. You also don’t get in-depth car customization — there are a limited number of colors to paint your car. Players do get decals that are automatically applied to the cars based on various achievements earned, but that’s about it. What it lacks in not being able to customize in automotive parts, body decals, and what not, Split/Second makes up for in game play.

The title offers racers the chance to bring the environment into play, these are called “power plays.” After filling your power play meter by performing drifts around corners or drafts from following your opponents closely, you are able to attack another racer. A mark appears over a car or cars in close proximity, hitting the A button causes buildings and other structures around the track to collapse. Now that’s how you eliminate the competition!

The game is not solely focused on the race to the finish line, but contains other game modes as well. There is “Detonator,” which is a time-trials mode where hazards are triggered whenever you come close to something; “Survival,” which is just you against yourself trying to stay alive and rack up points avoiding obstacles that are in your path; and my favorite, “Elimination.” In Elimination, you have to avoid being in last place. There are different checkpoints, and the player who finds themselves in last once the clock hits zero is eliminated from the race. The last car standing is declared the winner.

If you finish the single-player modes, you can show off your skills in multiplayer. Multiplayer consists of a two local player split-screen or eight players online. Players can compete against one another in traditional racing, Survival, or Elimination. Finishing all or most of the Season Mode makes for a better online multiplayer experience as you’ll have the necessary new (better) cars. Most online players are using the later unlocked cars so if you show up to the race using a “slower car” you are almost guaranteed to get left behind.

Split/Second really gives you the feeling of actually going speeds approaching 200 mph and weaving in and out through the other cars. Avoiding a bridge collapse or a crane swinging from side-to-side can really bring you to the edge of your seat. The visuals are great, each location looks better than the last. The sound is impressive, from the cars and explosions to the musical score. The unpredictability makes for enough game between single player Season Mode and multiplayer to last you for a while. So buckle in and get ready for the race of your life!

Split/Second is rated E10+ (Everyone 10 and older) by the ESRB for Violence. This game can also be found on: PS3 and PC.